Lagunaria is a monotypic genus in the family Malvaceae. It is an Australian plant endemic to Lord Howe Island, Norfolk Island and parts of coastal Queensland. It has been introduced to many parts of the world. The genus was named in honour of Andrés Laguna, a Spanish botanist and a physician to Pope Julius III. It now consists of the single species Lagunaria patersonia, commonly known as the Pyramid Tree or Norfolk Island Hibiscus. It is not a true Hibiscus, however, but does belong to the same plant family, Malvaceae.

Recently, L. queenslandica from north-east Queensland has been recognised. The latter was previously regarded as L. patersonia subsp. bracteata but has been raised to species status on the basis of morphological and ecological differences. L. patersonia also is more robust in habit and has larger, scaly leaves. The two species also differ in their habitats with L. patersonia generally occurring in rainforest while L. queenslandica is found in non-rainforest areas often along rivers and creeks.

Norfolk Island hibiscus is a medium to large tree which can reach about 12-20 metres in height. It has dense, greyish-green leaves which are oval shaped to about 100 mm long and covered in soft hairs when young. The pink flowers are of typical hibiscus shape and appear in the leaf axils in spring and early summer. They are generally a pink to mauve but deeper coloured forms are in cultivation.

These trees are often planted along Melbourne streets and in parks and when in flower can be quite spectacular. The seed capsules are filled with irritating hairs giving rise to another common name, Cow Itch Tree. The "cow" part however appears to be a misnomer. In many parts of Australia, Lagunaria is considered a pest, and is commonly referred to as the Itchy Bomb Tree due to the tiny, almost invisible, hairs inside the seed pods which, if the seeds pods are split open, can lodge in the skin like tiny barbs of broken glass, causing a great deal of pain. 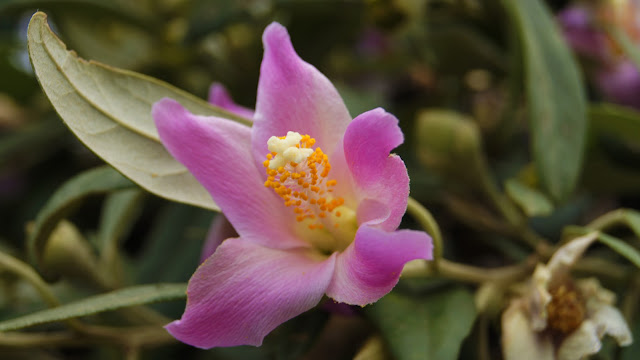 Add your own link to the Linky list below and say hello in a comment. Please visit other participants in the meme. I am swamped with work at the moment, so even though I appreciate your participation, I cannot visit all of your blogs...

Posted by Melbourne Australia Photos at 05:28