Delphinium is a genus of about 300 species of perennial flowering plants in the family Ranunculaceae, native throughout the Northern Hemisphere and also on the high mountains of tropical Africa. All members of the Delphinium genus are toxic to humans and livestock. The common name "larkspur" is shared between perennial Delphinium species and annual species of the genus Consolida. The name "delphinium" derives from the Latin for "dolphin", referring to the shape of the nectary. 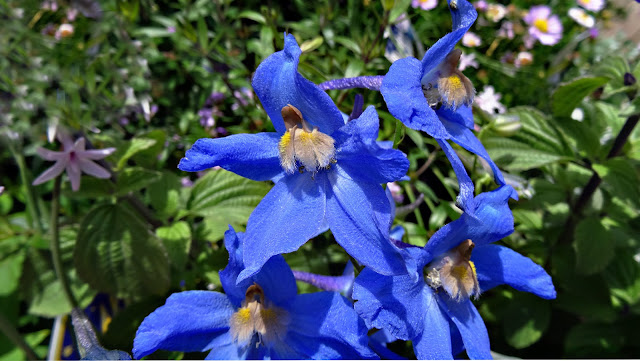 Rosa "Mother and Child" is a new release hybrid from Rankin’s Roses for 2015. The elegant strong stems of "Mother and Child" peak into highly fragrant clusters of dark pink flowers, with up to 10 flowers per stem. Set off by hardy, dark green foliage, the beautiful blooms of "Mother and Child" will flower profusely and will stay disease free (very resistant to black spot and mildew in gardens). The rose grows approximately 1.1m high x 0.6m wide. Rankin's "Mother and Child" sales will follow the tradition in supporting research into MND (Motor Neurone Disease) to find a cure for this terrible disease. 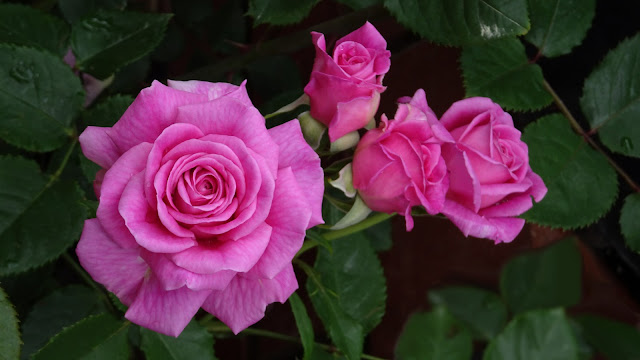 The flora of South Africa and Australia is quite distinctive with quite a few rich botanical families that provide a diverse and amazing bouquet of flowers. The Proteaceae (banksias, grevilleas, waratahs) and Myrtaceae (eucalypts, bottlebrushes, titrees, lillipillis) especially are well represented. 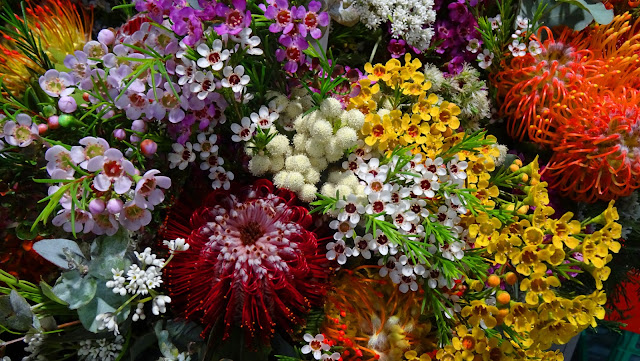 Hatiora gaertneri is a species of epiphytic cactus within the family Cactaceae. Together with the hybrid with H. rosea, Hatiora ×graeseri, it is known as Easter cactus or Whitsun cactus and is a widely cultivated ornamental plant. H. gaertneri is found in southeastern Brazil, in Paraná and Santa Catarina, at altitudes of 350–1,300 m. As with other species of the genus, H. gaertneri grows on trees (epiphytic) or less often rocks (lithophytic) in tropical rain forests.

With maturity, it develops into a branching pendant leafless shrub with a woody base. The stems are made up of segments, most of which are flattened and which are the photosynthetic organs (cladodes) of the plant. Structures characteristic of cacti, called areoles, form in these notches. Flowers form from areoles at the ends of the stems. These are scarlet in colour, 4–5 cm long, radially symmetrical (actinomorphic), opening to a funnel shape with a maximum diameter of about 4–7.5 cm. Red oblong fruits form after the flowers are fertilised.

Under the name Easter cactus or Whitsun cactus, Hatiora gaertneri is widely cultivated as an ornamental plant for its scarlet flowers. Its common names reflect the period in which it flowers in the Northern Hemisphere, namely late Spring. It has been artificially crossed with a pink-flowered species, Hatiora rosea, to form the hybrid H. × graeseri, cultivars of which have flowers in a wider range of colours. The Easter cactus is considered more difficult to grow than the Christmas or Thanksgiving cactus (Schlumbergera).

Recommendations for care include:
Temperature Summer temperatures around 25 °C are suggested, with lower temperatures down to 7–13 °C in the winter (November to January in the Northern Hemisphere) to initiate good bud formation.
Light As epiphytic forest plants, they are not exposed to strong sunlight. Half-shade is recommended; plants can be placed outside in the summer.
Watering The Easter cactus is said to respond badly to over- or under-watering, e.g. by losing stem segments; continuously moist soil is recommended.
Propagation Stem segments may be removed in late Spring and the cut surface allowed to dry out before being placed in slightly moist soil. 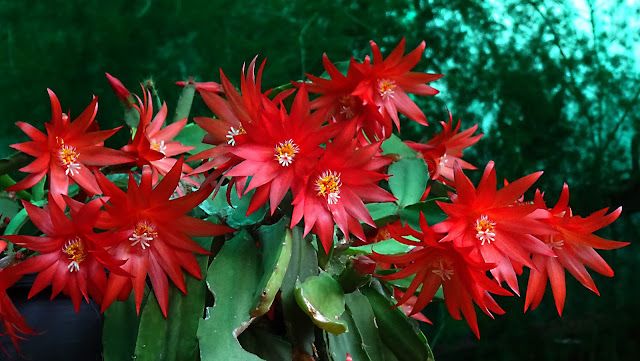