Jasminum nudiflorum, the winter jasmine, is a slender, deciduous shrub native to China (Gansu, Shaanxi, Sichuan, Xizang (Tibet), Yunnan). The flower's blossoming peaks right after winter, which is why it is also named Yingchun (迎春) in Chinese, which means "the flower that welcomes Spring". It is widely cultivated as an ornamental and is reportedly naturalized in France and in scattered locations in the United States (Texas, Oklahoma, Georgia, Tennessee, Maryland and New Jersey).
Jasminum nudiflorum is valued by gardeners as one of the few plants that are in flower during the winter months. It is frequently trained against a wall to provide extra warmth and shelter, but also lends itself to groundcover. It tolerates hard pruning and should be pruned in spring immediately after flowering; regular pruning will help to prevent bare patches. It can also be grown as a bonsai and is very tolerant of the wiring methods. It likes full sun or partial shade and is hardy. It has gained the Royal Horticultural Society's Award of Garden Merit. It can be propagated using the layering technique.
Join me for Floral Friday Fotos by linking your flower photos below, and please leave a comment once you have done so!
****If you take part in the meme, please show an active link back to this site on your own blog post!**** 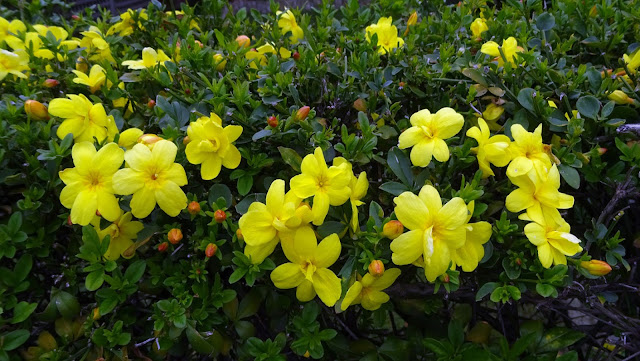 Narcissus is a genus of predominantly spring perennial plants in the Amaryllidaceae (amaryllis) family. Various common names including daffodil, daffadowndilly, narcissus, and jonquil are used to describe all or some members of the genus. Narcissus has conspicuous flowers with six petal-like tepals surmounted by a cup- or trumpet-shaped corona. The flowers are generally white or yellow (orange or pink in garden varieties), with either uniform or contrasting coloured tepals and corona. The hybrid illustrated here is "Tresamble".
Narcissus were well known in ancient civilisation, both medicinally and botanically, but formally described by Linnaeus' in his "Species Plantarum" (1753). The genus is generally considered to have about ten sections with approximately 50 species. The number of species has varied, depending on how they are classified, due to similarity between species and hybridisation. The genus arose some time in the Late Oligocene to Early Miocene epochs, in the Iberian peninsula and adjacent areas of southwest Europe.
The exact origin of the name Narcissus is unknown, but it is often linked to a Greek word for intoxicated (narcotic) and the myth of the youth of that name who fell in love with his own reflection. The English word 'daffodil' appears to be derived from "asphodel", with which it was commonly compared. The species are native to meadows and woods in southwest Europe and North Africa with a centre of diversity in the Western Mediterranean, particularly the Iberian peninsula. Both wild and cultivated plants have naturalised widely, and were introduced into the Far East prior to the tenth century.
Narcissi tend to be long-lived bulbs, which propagate by division, but are also insect-pollinated. Known pests, diseases and disorders include viruses, fungi, the larvae of flies, mites and nematodes. Some Narcissus species have become extinct, while others are threatened by increasing urbanisation and tourism.
Join me for Floral Friday Fotos by linking your flower photos below, and please leave a comment once you have done so!
****If you take part in the meme, please show an active link back to this site on your own blog post!**** 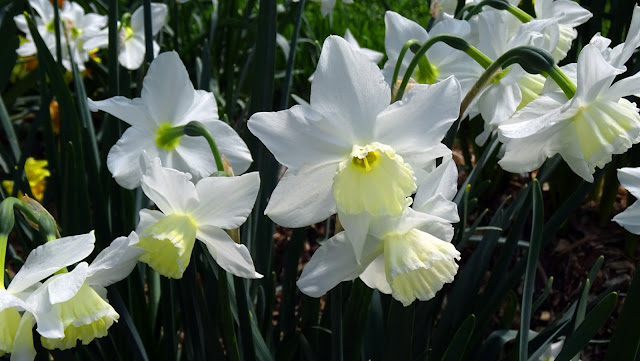 Scabiosa is a genus in the teasel Family Dipsacaceae of flowering plants. Many of the species in this genus have common names that include the word scabious; however some plants commonly known as scabious are currently classified in related genera such as Knautia and Succisa; at least some of these were formerly placed in Scabiosa. Another common name for members of this genus is pincushion flowers.

Members of this genus are native to Europe and Asia. Some species of Scabiosa, notably small scabious (S. columbaria) and Mediterranean sweet scabious (S. atropurpurea) have been developed into cultivars for gardeners. Illustrated here is the Scabiosa columbaria cultivar 'Pink Mist'.

Scabiosa plants have many small flowers of soft lavender blue, lilac or creamy white colour borne in a single head on a tall stalk. Scabious flowers are nectar rich and attract a variety of insects including moths and butterflies such as the Six-spot Burnet. Scabiosa species are also used as food plants by the larvae of some Lepidoptera species including Grey Pug. 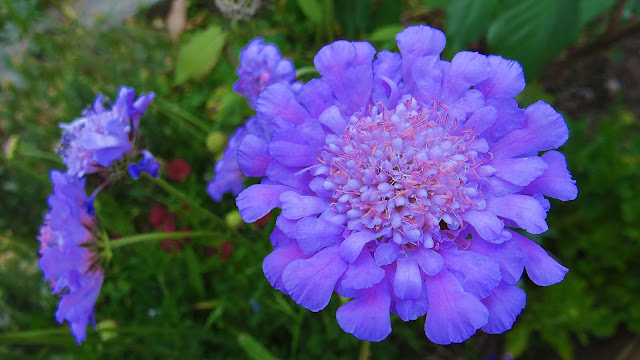 Tagetes lemmonii, or Lemmon's marigold, is a North American species of shrubby marigold, in the family Asteraceae. Other English names for this plant include Copper Canyon Daisy, Mountain Marigold, and Mexican Marigold. It is native to the states of Sonora and Sinaloa in northwestern Mexico as well as southern Arizona in the United States.
Mountain marigold is a shrub sometimes reaching as much as 240 cm tall. Leaves are up to 12 cm long, pinnately compound into 3-5 leaflets, each leaflet narrowly lance-shaped with teeth along the edge. The plant produces many small flower heads in a flat-topped array, each head with 3-8 ray florets and 12-30 disc florets. It grows in woodlands, cliffs, and moist sites.
Tagetes lemmonii blooms from fall into spring and can sometimes be blooming for up to 10 months. The foliage is fragrant (or unpleasantly pungent to some people) when disturbed. The species is very drought tolerant in a Mediterranean climate and much used in California gardens where it tolerates light frosts without damage. It is common in Melbourne, with many gardens having good displays of flowers even in Winter.
Leaves and flowers can be dried and added to potpourri and scented sachets, for their scent and colour, but also for their pest repellent qualities.
Join me for Floral Friday Fotos by linking your flower photos below, and please leave a comment once you have done so. 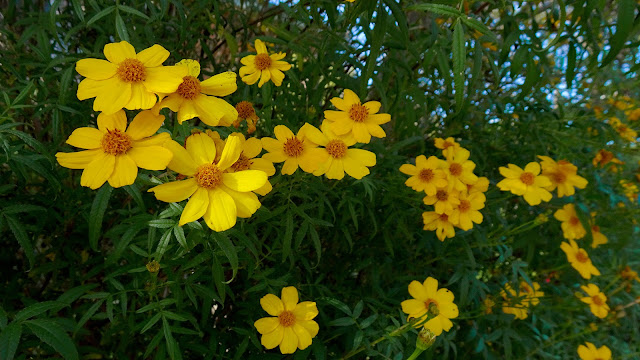