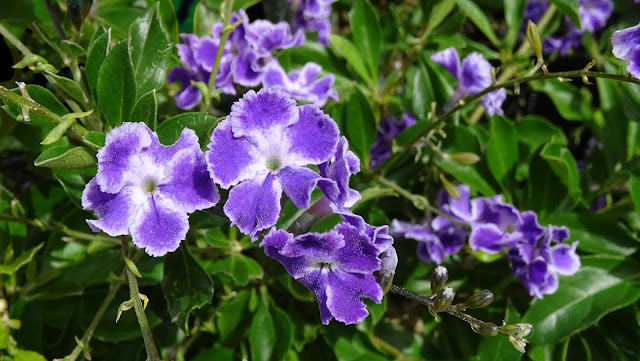 Tagetes erecta, the Mexican marigold, also called Aztec marigold, is a species of the genus Tagetes, family Asteraceae, native to Mexico. Despite its being native to the Americas, it is often called African marigold. In Mexico, this plant is found in the wild in the states of State of México, Puebla, and Veracruz. This plant reaches heights of between 50 and 100 cm. The Aztecs gathered the wild plant as well as cultivating it for medicinal, ceremonial and decorative purposes. It is widely cultivated commercially with many cultivars in use as ornamental plants, and for the cut-flower trade.

The ray florets have been used in lettuce salads and other foods to add colour and flavour. The dried flower petals, ground to a powder, may be used in poultry feed to ensure a good colouration of egg yolks and broiler skin, especially in the absence of well-pigmented yellow maize in the feed. This is still a use today, but now usually in the form of an extract which may have advantages of lower transport and storage cost, better stability and better utilisation. It is also used to enhance colouring in crustaceans, such as the Pacific white shrimp (Litopenaeus vannamei).

The oil of the flower may be added to perfumes to infuse an apple scent into them. Today, T. erecta is grown to extract lutein, a common yellow/orange food colour (E161b). The essential oil of the flower contains antioxidants.

Since prehispanic times, this plant has been used for medicinal purposes. The Cherokee used it as a skin wash and for yellow dye. This marigold may help protect certain crop plants from nematode pests when planted in fields. It is most effective against the nematode species Pratylenchus penetrans. 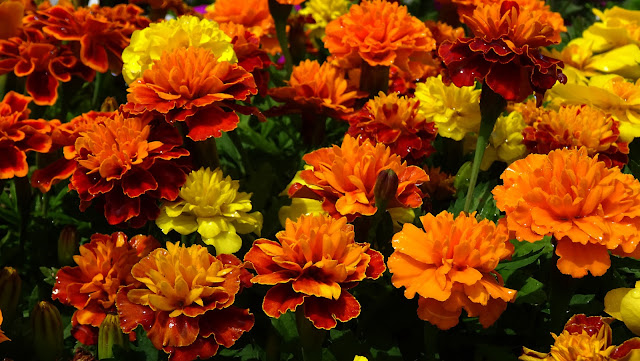 Rosa 'Pierre de Ronsard' is a moderately vigorous, climbing rose ideal to cover an arch or small trellis. Bred in France, by Meilland and introduced in 1987, 'Pierre de Ronsard' is a very disease resistant rose. The 7 to 10 cm globular flowers comprising 55 to 60 petals are a very attractive creamy white suffused with carmine pink borne singularly or in clusters up to 4 blooms on reasonably sturdy stems.

Adding to its seductive, colourful display these flowers have a light, delicious tea rose fragrance. Flowers last reasonably well when picked for floral arrangements. This rose has performed well throughout the world and thrives in our Melbourne climate. When grown against an arch, the plant can achieve heights around 3 metres, so it is preferable to plant a rose each side of the arch to achieve a complete and even cover in 3 to 4 years. Regular removal of spent blooms will ensure repeat and constant flowering throughout the growing season.

The rose name honours Pierre de Ronsard (B.1524 – D.1585). Pierre de Ronsard was a famous French Poet whose 16th Century poetry earned a place in literary history. He enjoyed a great life: Well educated, well-travelled, highly productive, popular and he mixed socially, as friends, with royals such as King Charles of France, Queen Elizabeth I of England and Mary Queen of Scots. His own generation, in France, called him the “Prince of Poets”. 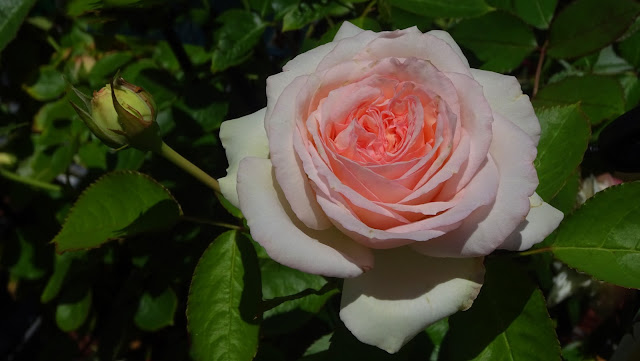 Zantedeschia is a genus of herbaceous flowering plants in the family Araceae, native to southern Africa from South Africa north to Malawi. The name of the genus was given as a tribute to Italian botanist Giovanni Zantedeschi (1773–1846) by the German botanist Kurt Sprengel (1766–1833). Common names include arum lily for Z. aethiopica, calla, and calla lily for Z. elliottiana and Z. rehmannii although it is neither a true lily (Liliaceae), nor Arum or Calla (related genera in Araceae). It is also often erroneously spelled as "cala lily". It has often been used in many paintings, and is visible in many of Diego Rivera's works of art (see The Flower Vendor, amongst others).

The Zantedeschias are rhizomatous herbaceous perennial plants growing to 1-2.5 m tall with leaves 15–45 cm long. The inflorescence is a showy white, yellow or pink spathe shaped like a funnel with a yellow, central, finger-like spadix. The Zantedeschia species are poisonous due to the presence of calcium oxalate. All parts of the plant are toxic, and produce irritation and swelling of the mouth and throat, acute vomiting and diarrhoea. However, in some countries the leaves are sometimes cooked and eaten after suitable preparation.

Zantedeschia rehmannii Pink Calla Lily, shown here, has charming, funnel-shaped blooms that may be pink, rose, lavender or violet. It is a smaller plant (growing up to 40 cm) than the white or yellow varieties. Its long, tapered leaves are deep green, often with faint white spots. 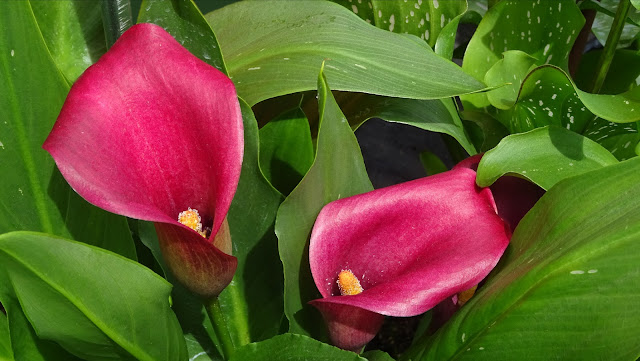