Ceratostigma willmottianum or Chinese plumbago is a deciduous shrub that provides great interest in early autumn when its slender stems bear pale blue flowers amongst the foliage that gradually turns red as the autumn season develops. This shrub is easy to grow in a sunny, well-drained spot and can be cut hard back in the spring where it can be utilised at the front of beds and borders in small or large gardens. The flowers are very attractive to butterflies. 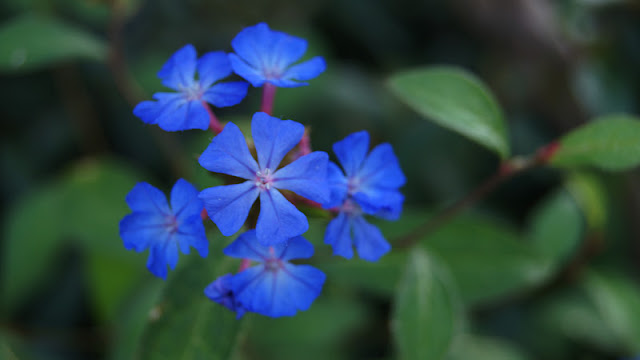 Cymbidium (or "boat orchids"), is a genus of 52 evergreen species in the orchid family Orchidaceae. It was first described by Olof Swartz in 1799. The name is derived from the Greek word kumbos, meaning 'hole, cavity'. It refers to the form of the base of the lip. The genus is abbreviated Cym in horticultural trade.

This particular cultivar illustrated here, is a hybrid designated Cymbidium Choc x Michael Herbert. It is one of the orchids we have growing in our garden and which are flowering now. Cymbidiums are one of the highlights of the autumn flowering season and we have several different cultivars that produce beautiful long spikes of flowers that last for several weeks. 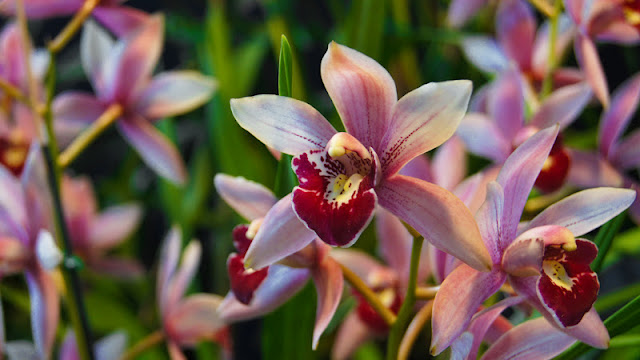 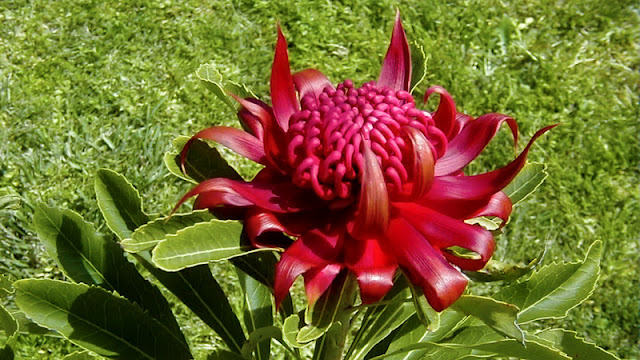 Jasminum, commonly known as jasmines, is a genus of shrubs and vines in the olive family (Oleaceae). It contains around 200 species native to tropical and warm temperate regions of the Old World. Jasmines are widely cultivated for the characteristic fragrance of their flowers.

Jasminum angulare (Wild Jasmine) is a species of jasmine that is indigenous to South Africa. This scrambling climber can be grown in the sun or semi-shade. It produces masses of white, scented, star-shaped flowers and it attracts a variety of birds. This is one of around 10 species of Jasmine that naturally occur in South Africa. 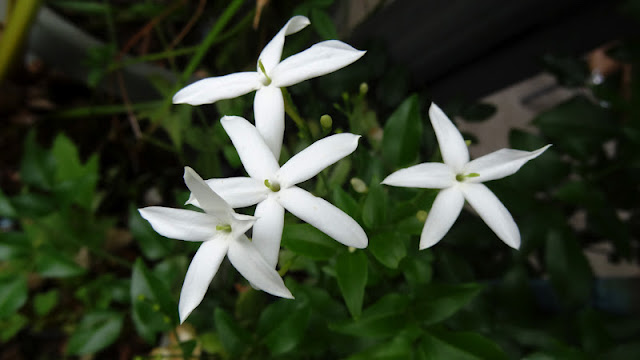 Chrysanthemums, often called mums or chrysanths, are of the genus Chrysanthemum, comprising approximately 30 species of perennial flowering plants in the family Asteraceae which is native to Asia and northeastern Europe. The name chrysanthemum was given tot hese plants by Linnaeus and is derived from the Greek words, chrysos (golden) and anthemon (flower), with many of the cultivated varieties having brilliant yellow-gold flowers.

Chrysanthemums were first cultivated in China as a flowering herb as far back as the 15th century BC. The plant is renowned as one of the "Four Gentlemen" in Chinese and East Asian art. The plant is particularly significant during the Double Ninth Festival. It is believed that the flower may have been brought to Japan in the 8th century CE, and the Emperor adopted the flower as his official seal. There is a "Festival of Happiness" in Japan that celebrates the flower. The flower was brought to Europe in the 17th century.

Modern chrysanthemums are much more showy than their wild relatives. The flowers occur in various forms, and can be daisy-like, decorative, pompons or buttons. This genus contains many hybrids and thousands of cultivars developed for horticultural purposes. In addition to the traditional yellow, other colors are available, such as white, purple, and red. The most important hybrid is Chrysanthemum × morifolium (syn. C. × grandiflorum), derived primarily from C. indicum but also involving other species. The photo here is from a plant in our garden, which was given to us as a cutting by a neighbour. It currently has a profuse showing of rich, large blossoms that brighten the wet and gray autumn days. 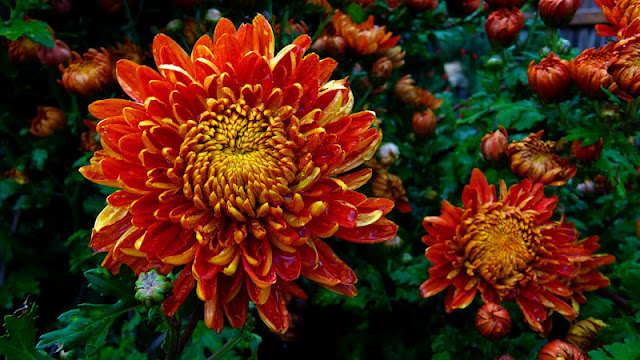