Gerbera L. is a genus of ornamental plants from the sunflower family (Asteraceae). It was named in honour of the German botanist and naturalist Traugott Gerber († 1743) who travelled extensively in Russia and was a friend of Carolus Linnaeus. It has approximately 30 species in the wild, extending to South America, Africa and tropical Asia. Gerbera is also commonly known as the African Daisy.
Gerbera species bear a large capitulum with striking, two-lipped ray florets in yellow, orange, white, pink or red colours. The capitulum, which has the appearance of a single flower, is actually composed of hundreds of individual flowers. The morphology of the flowers varies depending on their position in the capitulum. The flower heads can be as small as 7 cm (Gerbera mini 'Harley') in diameter or up to 12 cm (Gerbera ‘Golden Serena’).
Gerbera is very popular and widely used as a decorative garden plant or as cut flowers. The domesticated cultivars are mostly a result of a cross between Gerbera jamesonii and another South African species Gerbera viridifolia. The cross is known as Gerbera hybrida. Thousands of cultivars exist. They vary greatly in shape and size. Colours include white, yellow, orange, red, and pink. The centre of the flower is sometimes black. Often the same flower can have petals of several different colours.
Gerbera is also important commercially. It is the fifth most used cut flower in the world (after rose, carnation, chrysanthemum, and tulip). It is also used as a model organism in studying flower formation. Gerbera contains naturally occurring coumarin derivatives. Gerbera is a tender perennial plant. It is attractive to bees, butterflies and/or birds, but resistant to deer. The soil should be kept moist but not soaked.
Join me for Floral Friday Fotos by linking your flower photos below, and please leave a comment once you have done so. 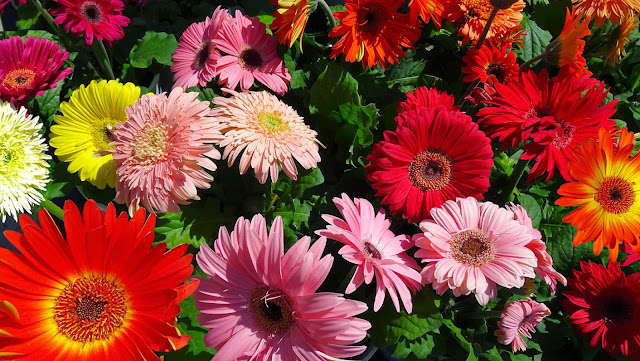 Pelargonium x garden is also known as the common geranium, zonal geranium or bedding geranium and is a common species in the Geraniaceae Family. This species of geranium is most commonly used as an ornamental plant. Hybrids include the usual nursery "seed-grown" and the "cutting grown", which can easily be grown at home by cutting and planting side branches.
Join me for Floral Friday Fotos by linking your flower photos below, and please leave a comment once you have done so. 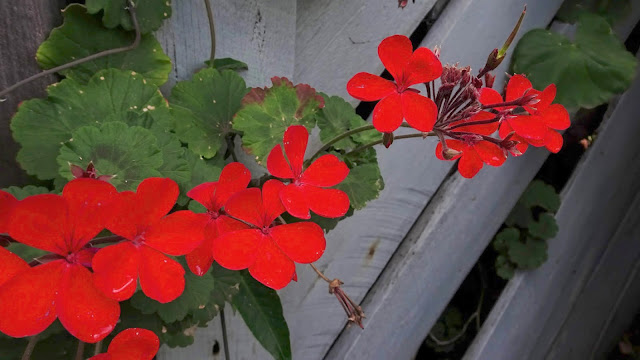 Camellia is a genus of flowering plants in the family Theaceae. They are found in eastern and southern Asia, from the Himalayas east to Japan and Indonesia. There are 100–250 described species, with some controversy over the exact number. The genus was named by Linnaeus after the Jesuit botanist Georg Joseph Kamel, who worked in the Philippines, though he never described a camellia. This genus is famous throughout East Asia; camellias are known as cháhuā (茶花) in Chinese, "tea flower", an apt designation, as tsubaki (椿) in Japanese, as dongbaek-kkot (동백꽃) in Korean and as hoa trà or hoa chè in Vietnamese.
Of economic importance in the Indian subcontinent and Asia, leaves of C. sinensis are processed to create the popular beverage, tea. The ornamental Camellia japonica, Camellia oleifera and Camellia sasanqua and their hybrids are represented in cultivation by a large number of cultivars.
Join me for Floral Friday Fotos by linking your flower photos below, and please leave a comment once you have done so. 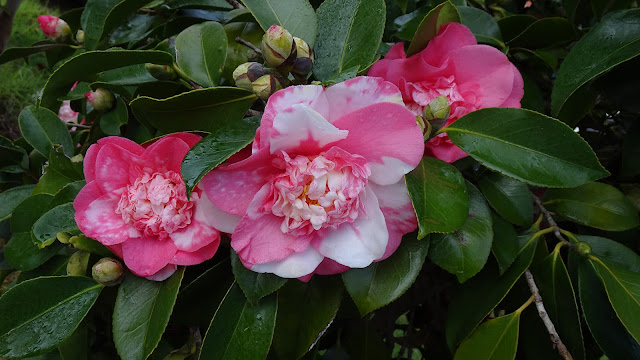