The pomegranate, Punica granatum, is a fruit-bearing deciduous shrub or small tree growing between five and eight meters tall. Native to the area of modern day Iran and Iraq, the pomegranate has been cultivated in the Caucasus since ancient times. From there it spread to Asian areas such as the Caucasus as well as the Himalayas in Northern India. Today, it is widely cultivated throughout Turkey, Iran, Syria, Azerbaijan, Armenia, Afghanistan, India, Pakistan, Bangladesh, Iraq, Lebanon, Egypt, China, Burma, Saudi Arabia, Israel, Jordan, the drier parts of southeast Asia, the Mediterranean region of Southern Europe, and tropical Africa.

Introduced into Latin America and California by Spanish settlers in 1769, pomegranate is also cultivated in parts of California and Arizona for juice production. In the Northern Hemisphere, the fruit is typically in season from September to February. In the Southern Hemisphere, the pomegranate is in season from March to May. Melbourne's mild climate is particularly well-suited to this tree and many fine specimens can be seen gracing the front and back yards of houses, especially those belonging to immigrants from the countries where the pomegranate is widespread

The pomegranate has been mentioned in many ancient texts, notably the Book of Exodus, the Homeric Hymns and the Quran. In recent years, it has reached mainstream prominence in the commercial markets of North America and the Western Hemisphere. Its health benefits are numerous and it finds widespread culinary uses. 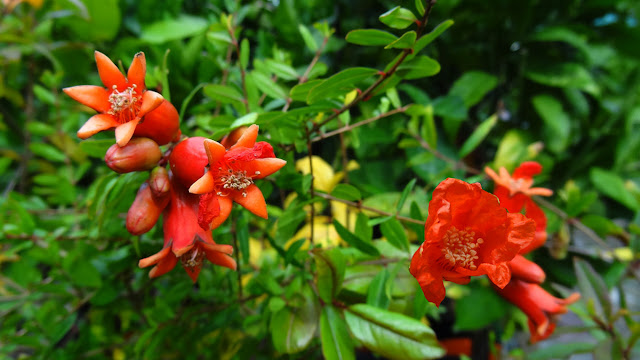 Cineraria is now generally treated as a genus of about 50 species of flowering plants in the family Asteraceae, native to southern Africa. The genus includes herbaceous plants and small sub-shrubs. In the past, the genus was commonly viewed in a broader sense including a number of species from the Canary Islands and Madeira which are now transferred to the genus Pericallis, including the Florist's Cineraria (Pericallis x hybrida). The uses for Cineraria include topical application for the treatment of cataracts.
Join me for Floral Friday Fotos by linking your flower photos below, and please leave a comment once you have done so! 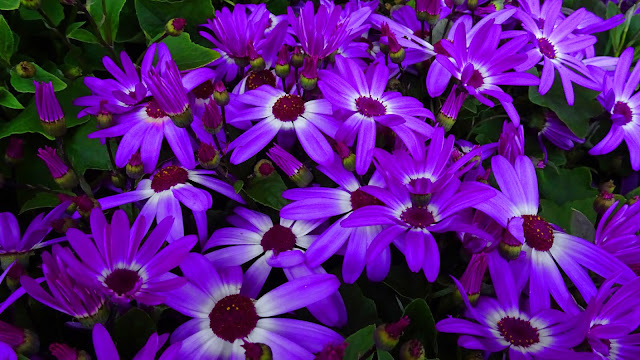 Dahlia imperialis or Bell tree dahlia is an 8-10 metre tall member of the Dahlia genus native to Mexico, Central America and Colombia. It is a plant of the uplands and mountains, occurring at elevations of 1,500–1,700 metres, and its leaves are used as a dietary supplement by the Q'eqchi' people of San Pedro Carchá in Alta Verapaz, Guatemala.

It is a tuberous, herbaceous perennial, rapidly growing from the base after a dormant winter period, developing brittle, cane-like, 4-angled stems with swollen nodes and large tripinnate leaves, those near the ground soon being shed. The pendant or nodding flowerheads are 75-150mm across with ray florets lavender or mauvish-pink in colour.

This species is fast-growing, the growth spurt being linked to shorter daylight hours, and usually comes into flower in autumn before the first frost. Propagation is by seed or by stem cuttings of some 30 cm long having at least two nodes, laid horizontally below the soil. Some Dahlia species were brought from Mexico to Europe in the 16th century. D. imperialis was first described in 1863 by Benedikt Roezl (1823–1885), the great Czech orchid collector and traveller, who, ten years later in 1872–73, went on his odyssey through the Americas. 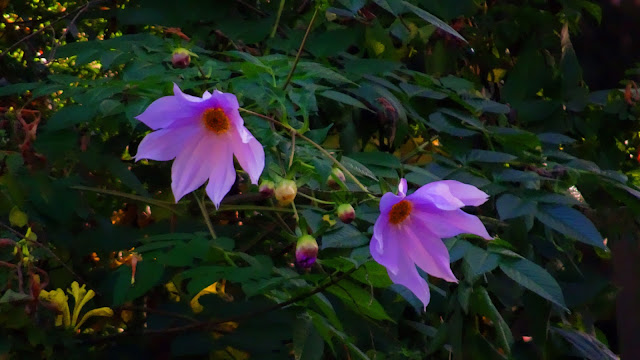 Osteospermum (African daisies) are popular flowers in cultivation, where they are frequently used in summer bedding schemes in parks and gardens. Numerous hybrids and cultivars have been grown with a wide range of tropical colours (white, pink, magenta, purple, orange, red, bicoloured, yellow, single and double). Yellow cultivars tend to have a yellow centre (sometimes off-white).
Plants prefer a warm and sunny position and rich soil, although they tolerate poor soil, salt or drought well. Modern cultivars flower continuously when watered and fertilised well, and dead-heading is not necessary, because they do not set seed easily. If planted in a container, soil should be prevented from drying out completely. If they do, the plants will go into "sleep mode" and survive the period of drought, but they will abort their flower buds and not easily come back into flower. Moreover, roots are relatively susceptible to rotting if watered too profusely after the dry period.
Join me for Floral Friday Fotos by linking your flower photos below, and please leave a comment once you have done so. 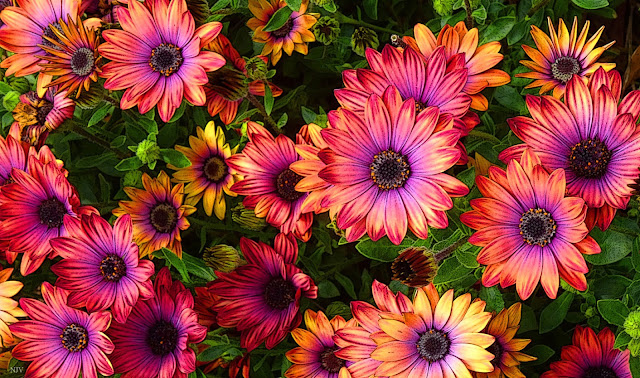