Cornus is a genus of about 30–60 species of woody plants in the family Cornaceae, commonly known as dogwoods, which can generally be distinguished by their blossoms, berries, and distinctive bark. Most are deciduous trees or shrubs, but a few species are nearly herbaceous perennial subshrubs, and a few of the woody species are evergreen. Several species have small heads of inconspicuous flowers surrounded by an involucre of large, typically white petal-like bracts, while others have more open clusters of petal-bearing flowers.
The various species of dogwood are native throughout much of temperate and boreal Eurasia and North America, with China and Japan and the southeastern United States particularly rich in native species. Species include the common dogwood Cornus sanguinea of Eurasia, the widely cultivated flowering dogwood (Cornus florida) of eastern North America, the Pacific dogwood Cornus nuttallii of western North America, the Kousa dogwood Cornus kousa of eastern Asia, and two low-growing boreal species, the Canadian and Eurasian dwarf cornels (or bunchberries), Cornus canadensis and Cornus suecica respectively.
Depending on botanical interpretation, the dogwoods are variously divided into one to nine genera or subgenera.
Join me for Floral Friday Fotos by linking your flower photos below, and please leave a comment once you have done so.
**If you take part in the meme, please show an active link back to this site on your own blog post!*** 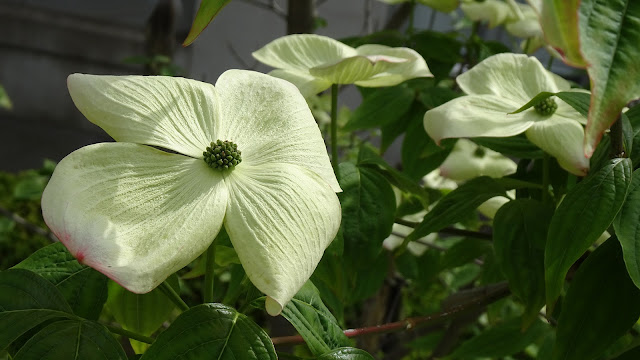 Click here to enter
Posted by Melbourne Australia Photos at 05:23