Ceratopetalum gummiferum, the New South Wales Christmas Bush, is a tall shrub or small tree popular in cultivation due to its sepals that turn bright red-pink at around Christmas time. The petals are actually small and white - it is the sepals that enlarge to about 12mm after the flower sets fruit and starts to dry out. The specific name gummiferum alludes to the large amounts of gum that is discharged from cut bark.
Plants initially grow as rounded shrubs but mature to pyramidical trees. The leaves comprise three leaflets and are up to 8 cm long. The petioles are grooved on the upper side and are 10 to 20 mm long. Small, white five-petalled flowers appear in spays from October in the species native range. As these die the sepals enlarge and become pink to red in colour, the display peaking at Christmas time in Australia (i.e. during Summer).
Ceratopatalum gummiferum is one of nine species in the genus Ceratopetalum in the family Cunoniaceae, which occur in Australia and Papua New Guinea. The species was first formally described by English botanist James Edward Smith in 1793 in 'A Specimen of the Botany of New Holland'. The species is endemic to New South Wales where it occurs to the east of the Great Dividing Range from Ulladulla in the south to Evans Head in the north.
In cultivation, plants usually grow to no more than 6 metres in height. Plants may be propagated from seed or cuttings, the latter method being preferred to maintain good colour forms. Well-drained soil is required to avoid problems with dieback associated with root-rot fungus.
Join me for Floral Friday Fotos by linking your flower photos below, and please leave a comment once you have done so.
If you take part in the meme, please show an active link back to this site on your own blog post! 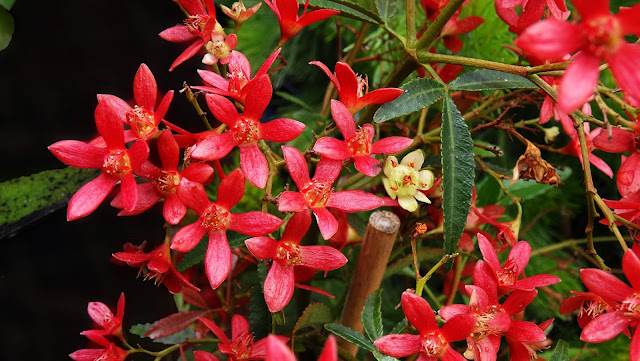 Click here to enter
Posted by Melbourne Australia Photos at 04:48