Anemone hupehensis, Anemone hupehensis var. japonica, and Anemone × hybrida (commonly known as the Chinese anemone or Japanese anemone, thimbleweed, or windflower) are species of flowering herbaceous perennials in the Ranunculaceae family. A. hupehensis is native to central China, though it has been naturalised in Japan for hundreds of years.

The species was first named and described in Flora Japonica (1784), by Carl Thunberg. Thunberg had collected dried specimens while working as a doctor for the Dutch East Indies Company. In 1844, Robert Fortune brought the plant to England from China, where he found it often planted about graves. Height is 1–1.5 m and the leaves have three leaflets.
Flowers are 40–60 mm across, with 5-6 (or up to 20 in double forms) sculpted pink or white petals and prominent yellow stamens, blooming from midsummer to autumn. These plants thrive best in shady areas and under protection of larger plants. They are especially sensitive to drought or overwatering. They can be invasive or weedy in some areas, throwing out suckers from the fibrous rootstock, to rapidly colonise an area. Once established they can be extremely difficult to eradicate. On the other hand, they can take some time to become established.
Join me for Floral Friday Fotos by linking your flower photos below, and please leave a comment once you have done so! 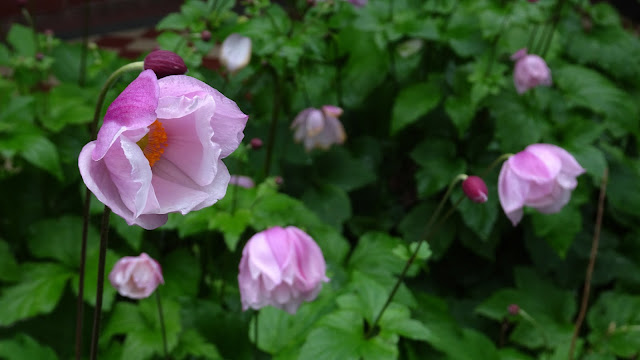