Myrtus, with the common name myrtle, is a genus of flowering plants in the family Myrtaceae, described by Linnaeus in 1753. The Myrtus genus has two species recognised today: Myrtus communis, common myrtle; native to the Mediterranean region in southern Europe and Myrtus nivellei, Saharan myrtle; native to North Africa.

Myrtus communis, the common myrtle or true myrtle, is native across the northern Mediterranean region (especially in the islands of Sardinia and Corsica, where it is locally known by the name of murta). The plant is an evergreen shrub or small tree, growing to 5 metres tall. The leaf is entire, 3–5 cm long, with a fragrant essential oil. The star-like flower has five petals and sepals, and numerous stamens. Petals usually are white. The flower is pollinated by insects. The fruit is a round berry containing several seeds, most commonly blue-black in colour. A variety with yellow-amber berries is also present. The seeds are dispersed by birds that eat the berries.

Myrtle, is used in the islands of Sardinia and Corsica to produce an aromatic liqueur called Mirto by macerating it in alcohol. Mirto is one of the most typical drinks of Sardinia and comes in two varieties: mirto rosso (red) produced by macerating the berries, and mirto bianco (white) produced from the less common yellow berries and sometimes the leaves. Many Mediterranean pork dishes include Myrtle berries, and roast baby pig is often stuffed with myrtle sprigs in the belly cavity, to impart an aromatic flavour to the meat. The berries, whole or ground, have been used as a pepper substitute. They contribute to the distinctive flavour of mortadella sausage and the related American bologna sausage. In Calabria, dried figs are threaded through a myrtle branch and then baked. The figs acquire a pleasant taste from the essential oils of the herb. They are then enjoyed through the winter months.

Myrtle occupies a prominent place in the writings of Hippocrates, Pliny, Dioscorides, Galen, and the Arabian writers on medicine. In several countries, particularly in Europe and China, there has been a tradition for prescribing this substance for sinus infections. A systematic review of herbal medicines used for the treatment of rhinosinusitis concluded that the evidence that any herbal medicines are beneficial in the treatment of rhinosinusitis is limited, and that for Myrtus there is insufficient data to verify the significance of clinical results.

In Greek mythology and ritual the myrtle was sacred to the goddesses Aphrodite and Demeter: Artemidorus asserts that in interpreting dreams “a myrtle garland signifies the same as an olive garland, except that it is especially auspicious for farmers because of Demeter and for women because of Aphrodite. For the plant is sacred to both goddesses.” Pausanias explains that one of the Graces in the sanctuary at Elis holds a myrtle branch because “the rose and the myrtle are sacred to Aphrodite and connected with the story of Adonis, while the Graces are of all deities the nearest related to Aphrodite.” Myrtle is the garland of Iacchus, according to Aristophanes, and of the victors at the Theban Iolaea, held in honour of the Theban hero Iolaus. 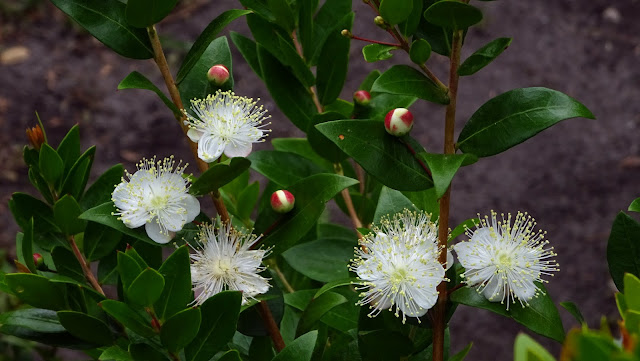 Posted by Melbourne Australia Photos at 06:38