Rotheca is a genus of flowering plants in the family Lamiaceae. Estimates of the number of species in the genus vary from about 35 to as many as 60. Three of the species are native to tropical Asia, with the rest occurring in Sub-Saharan Africa. The type species for the genus is Rotheca serrata. It had originally been named Rotheca ternifolia, but this name is now considered illegitimate.

Rotheca myricoides (blue butterfly bush) is native to tropical East Africa and is cultivated as an ornamental throughout the tropics. Rotheca serrata is from tropical Asia and has some medicinal use there. In the 20th century, Rotheca was rarely recognised as separate from Clerodendrum. Rotheca was revived in 1998 as a result of phylogenetic analysis of DNA sequences. It can easily be distinguished from Clerodendrum by a combination of morphological characters.

Rotheca myricoides (also known by its older name Clerodendrum ugadense) is more commonly referred to as the blue butterfly bush. It is called this because of the shape of its flowers. In the early summer, it produces beautiful light blue and lavender flowers that bloom into a shape that resembles a butterfly. It is an evergreen shrub that gets up to 3 metres tall and just as wide. It is native to Kenya and Uganda in East Africa. It enjoys partial shade and requires regular watering. 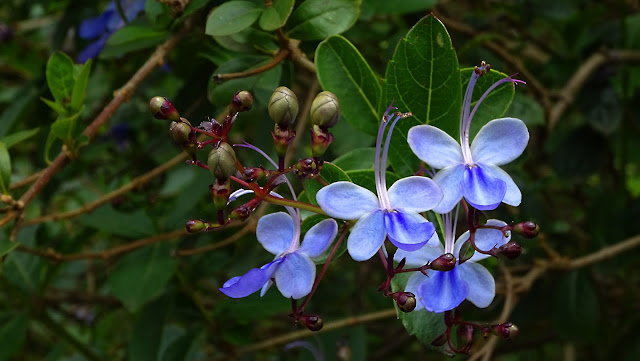 Posted by Melbourne Australia Photos at 05:43