This has been a very busy week and I am sorry I have not visited your blogs to see your contributions for last week's Floral Fridays. You all know that I always appreciate your photos and news from your part of the world. At least today I was able to grab the camera and rush out at lunchtime to take some photos in the garden and in the park across the road. We've had a glorious Spring day today and the flowers looked their best.

Callistemon species in the family Myrtaceae have commonly been referred to as bottlebrushes because of their cylindrical, brush like flowers resembling a traditional bottle brush. They are mostly found in the more temperate regions of Australia, especially along the east coast and typically favour moist conditions so when planted in gardens thrive on regular watering. However, two species are found in Tasmania and several others in the south-west of Western Australia. At least some species are drought-resistant and some are used in ornamental landscaping elsewhere in the world. This red bottlebrush is a common garden and street tree in Melbourne.

The rainbow lorikeet (Trichoglossus moluccanus) is a species of parrot found in Australia. It is common along the eastern seaboard, from northern Queensland to South Australia and Tasmania. Its habitat is rainforest, coastal bush and woodland areas. Several taxa traditionally listed as subspecies of the rainbow lorikeet are now treated as separate species Rainbow lorikeets have been introduced to Perth, Western Australia; Auckland, New Zealand; and Hong Kong. 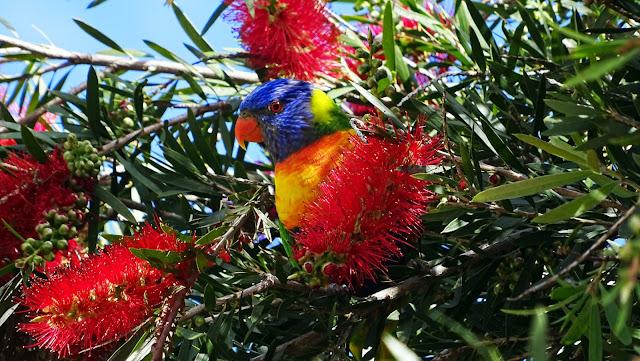