Doryanthes is the sole genus in the flowering plant family Doryanthaceae. The genus consists of two species, D. excelsa and D. palmeri, both native to the coast of Eastern Australia. Plants grow in a rosette form, only flowering after more than 10 years. They enjoy a warm environment, good soil, and much water during the warmest time of the year.
The genus Doryanthes was first described in 1802 by the Portuguese priest, statesman, philosopher and botanist José Francisco Corrêa da Serra (1751–1823), a close friend of Joseph Banks. Doryanthes excelsa or "Gymea Lily", endemic to southern Sydney and the Illawarra. The family Doryanthaceae, placed in the order Asparagales of the monocots, has only recently been recognised by taxonomists. Formerly the genus was usually placed in the family Agavaceae.
Doryanthes palmeri (the Giant Spear Lily), shown here, grows in a rosette and the leaves can reach the length of about 3 m. The flowers arise in springtime on a stalk which may reach 5 m in height. A succulent herb, its leaves are hairless and grow in the shape of a sword. The Giant Spear Lily is listed as 'vulnerable' under the New South Wales Threatened Species Act (1995). Here it is seen growing in Melbourne's Fitzroy Gardens, close to the Conservatory.
Join me for Floral Friday Fotos by linking your flower photos below, and please leave a comment once you have done so!
****If you take part in the meme, please show an active link back to this site on your own blog post!**** 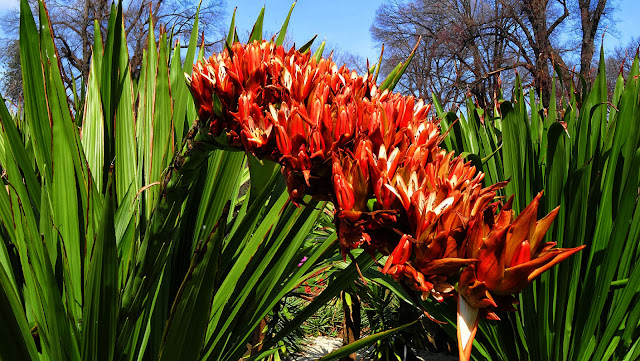 Click here to enter
Posted by Melbourne Australia Photos at 07:07