Kennedia nigricans (Black Kennedia or Black Coral Pea) is a species of flowering plant in the family Fabaceae, endemic to the south-west of Western Australia. It is a vigorous climber which can spread up to 6 metres in diameter or 4 metres in height and has dark green leaflets that are about 15 cm long. Distinctive black and yellow pea flowers are produced between July and November in its native range.

The species was first formally described as Kennedya nigricans by John Lindley in 1835 in Edward's Botanical Register, where it was also labelled as Dingy Flowered Kennedya. A cultivar known as Kennedia nigricans 'Minstrel' was registered with the Australian Cultivar Registration Authority by Goldup Nursery of Mount Evelyn, Victoria in September 1985. This cultivar was selected from a batch of seedlings in 1983 and has a pale colouration instead of the yellow, which appears almost white.

This plant is noted for its vigour and can be used to cover embankments or unsightly structures. The species is adapted to a range of soils and prefers a sunny position. It is resistant to drought and has some frost tolerance. The species can be propagated by scarified seed or cuttings of semi-mature growth, while the cultivar requires propagation from cuttings to remain true to type. 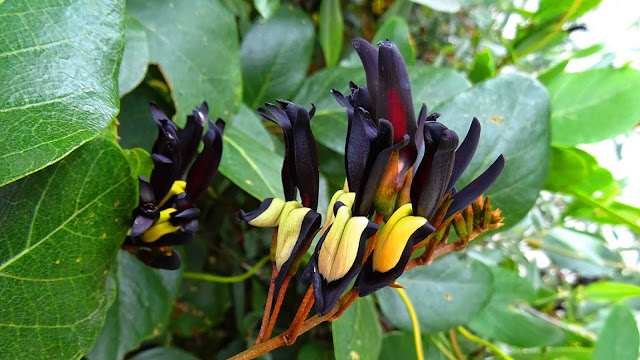 Click here to enter
Posted by Melbourne Australia Photos at 06:26