Echium candicans (syn. Echium fastuosum J.Jacq.), commonly known as "pride of Madeira", is a species of flowering plant in the family Boraginaceae, native to the island of Madeira. It is a large herbaceous biennial subshrub, growing to 1.5–2.5 m, found in Madeira's far east.

In the first year after germination the plant produces a broad rosette of leaves. In the second and subsequent years more or less woody flowering stalks are produced clothed in rough leaves. The flower head is large and covered with blue flowers having red stamens. It is much visited by bees and butterflies for its nectar. White-flowered cultivars are also seen.

Echium candicans is cultivated in the horticulture trade and widely available throughout the world as an ornamental plant for traditional and drought tolerant water conserving gardens. It is particularly suitable for coastal planting, and is a popular ornamental in coastal California. With a minimum temperature requirement of 5–7 °C, in frost-prone areas it needs some winter protection. It has gained the Royal Horticultural Society's Award of Garden Merit. 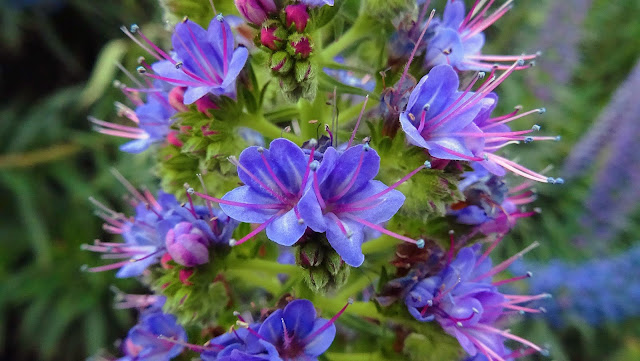 Click here to enter
Posted by Melbourne Australia Photos at 06:46