Malva arborea (also known as Lavatera arborea, or, more recently as Malva eriocalyx), the tree mallow, is a species of mallow native to the coasts of western Europe and the Mediterranean region, from the British Isles south to Algeria and Libya, and east to Greece. It is a shrubby annual, biennial or perennial plant growing to 0.5–2 m (rarely 3 m) tall. The leaves are orbicular, 8–18 cm diameter, palmately lobed with five to nine lobes, and a coarsely serrated margin.

The flowers are 3–4 cm diameter, dark pink to purple and grow in fasciculate axillary clusters of two to seven. It grows mainly on exposed coastal locations, often on small islands, only rarely any distance inland. Although long considered a species of Lavatera, genetic and morphological analysis by Martin Forbes Ray, reported in 1998, suggested it was better placed in the genus Malva, in which it was named Malva dendromorpha M.F.Ray. However the earlier name Malva arborea L. (Webb & Berthol.) was validly published and has priority over Malva dendromorpha.

Malva arborea tolerates sea water to varying degrees, at up to 100% sea water in its natural habitat, excreting salt through glands on its leaves. This salt tolerance can be a competitive advantage over inland plant species in coastal areas. Its level of salinity tolerance is thought to be improved by soil with higher phosphate content, making guano enrichment particularly beneficial.

The leaves of the species are used in herbal medicine to treat sprains, by steeping them in hot water and applying the poultice to the affected area. It is theorised that lighthouse keepers may have spread the plant to some British islands for use as a poultice and to treat burns, an occupational hazard. Thought to have been used as an alternative to toilet paper. The seeds are edible and are known in Jersey as "petit pains", or "little breads". Tree mallow was considered a nutritive animal food in Britain in the 19th century, and is still sometimes used as animal fodder in Europe. For human consumption, some sources describe the leaves of tree mallow as edible, although not as palatable as common mallow, unless cut very thinly, because of the velour-like texture. 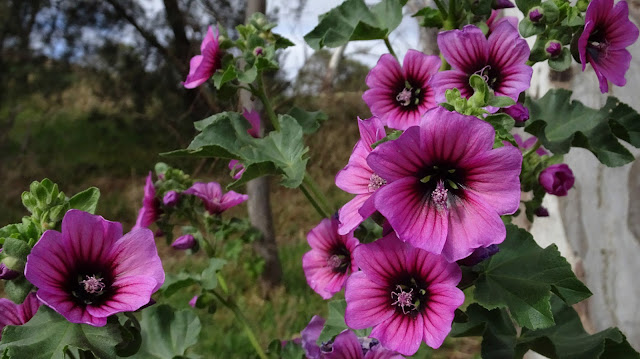