Chives is the common name of Allium schoenoprasum, in the family Amaryllidaceae. It, like most of the other species of the Allium genus, is a choice edible herb. A perennial plant, it is widespread in nature across much of Europe, Asia and North America. A. schoenoprasum is the only species of Allium native to both the New and the Old Worlds.

The name of the species derives from the Greek σχοίνος, skhoínos (sedge) and πράσον, práson (leek). Its English name, chives, derives from the French word cive, from cepa, the Latin word for onion. Chives are a commonly used herb and can be found in grocery stores or grown in home gardens. In culinary use, the scapes and the unopened, immature flower buds are diced and used as an ingredient for fish, potatoes, soups, and other dishes. Chives have insect-repelling properties that can be used in gardens to control pests.

The flowers are pale purple, and star-shaped with six petals, 1–2 cm wide, and produced in a dense inflorescence of 10-30 together; before opening, the inflorescence is surrounded by a papery bract. The seeds are produced in a small three-valved capsule, maturing in summer. The herb flowers from April to May in the southern parts of its habitat zones and in June in the northern parts. 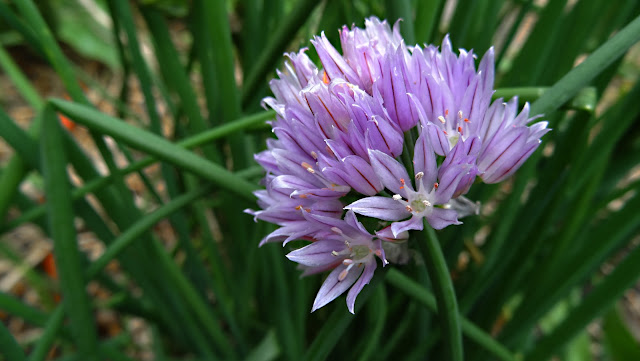