A bee feasting on a Shasta daisy, Leucanthemum × superbum. The Shasta daisy, is a commonly grown flowering herbaceous perennial plant with the classic daisy appearance of white petals (ray florets) around a yellow disc, similar to the oxeye daisy Leucanthemum vulgare (Lam), but larger.

It was named after Mount Shasta, because its petals were the colour of the snow. Some members of the genus are considered noxious weeds, but the Shasta daisy remains a favourite garden plant.

Join me for Floral Friday Fotos by linking your flower photos below, and please leave a comment once you have done so! If you link your post here, please show a link back to this site on your blog post. 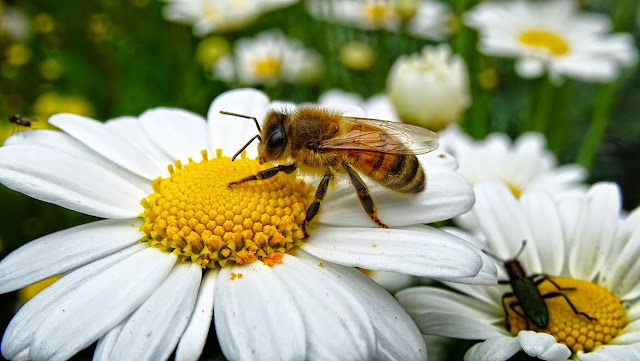 Click here to enter
Posted by Melbourne Australia Photos at 05:51