Leucadendron salignum is the most widespread species of the family Proteaceae, occurring in a large part of South Africa. It is common from Port Elizabeth in the east, to north of Ceres in the west. It occurs on a wide range of soil types, from sea level to an altitude of 2000 m and is quite variable in leaf size as well as leaf- and bract colour.
Leucadendrons are dioecious, i.e. separate male and female plants. This is unusual in the protea family. Its long flowering season (May - Dec), coupled with colourful leaves and bracts surrounding the flowers, make this species an attractive garden plant. Leucadendron salignum is a multi-stemmed shrub with a persistent rootstock, which enables it to resprout after fire. In its natural conditions it grows to a height of 0.75 to 2 m.
The variability of growing conditions, from mild winter temperatures to snow and frost near mountain tops, as well as the variability of leaves and bracts, from greenish-yellow to vivid orange-red, have made this species an excellent candidate for hybridisation. In addition, this species adapts well to vigorous pruning, which makes it suitable for the production of cut foliage on a large scale. These characteristics have made the species a natural choice for the wild flower industry.
There are a range of plants in cultivation, which differ markedly from the usual parent species, most often in growth form, leaf- and bract colour and flowering time. They may be either selections, known as 'cultivars' or hybrids, i.e. 'crosses' between species. Many hybrids and cultivars have been produced in South Africa, New Zealand, Australia and other countries growing Proteaceae. The hybrid illustrated is 'Royal Ruby'.
Join me for Floral Friday Fotos by linking your flower photos below, and please leave a comment once you have done so! If you link your post here, please show a link back to this site on your blog post... 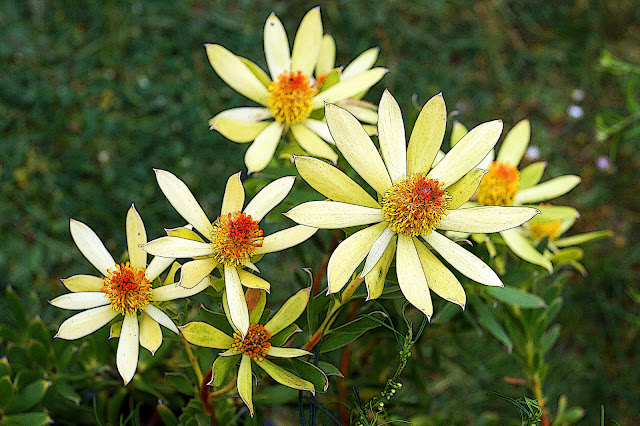 Click here to enter
Posted by Melbourne Australia Photos at 06:04