Clematis vitalba (also known as Old man's beard and Traveller's Joy) is a shrub of the Ranunculaceae family. Clematis vitalba is a climbing shrub with branched, grooved stems, deciduous leaves, and scented greenish-white flowers with fluffy underlying sepals. The many fruits formed in each inflorescence have long silky appendages which, seen together, give the characteristic appearance of Old Man's beard. The grooves along the stems of C. vitalba can easily be felt when handling the plant. This species is eaten by the larvae of a wide range of moths. This includes many species which are reliant on it as their sole foodplant; including Small Emerald, Small Waved Umber and Haworth's Pug.
Due to its disseminatory reproductive system, vitality, and climbing behaviour, Clematis vitalba is an invasive plant in most places, including many in which it is native. Some new tree plantations can be suffocated by a thick layer of Clematis vitalba, if not checked. In New Zealand it is declared an "unwanted organism" and is listed in the National Pest Plant Accord. It cannot be sold, propagated or distributed. It is a potential threat to native plants since it grows vigorously and forms a canopy which smothers all other plants and has no natural controlling organisms in New Zealand. New Zealand native species of Clematis have smooth stems and can easily be differentiated from C. vitalba by touch.
Clematis vitalba was used to make rope during the Stone Age in Switzerland. In Slovenia, the stems of the plant were used for weaving baskets for onions and also for binding crops. It was particularly useful for binding sheaves of grain because mice do not gnaw on it. It is also widely considered in the medical community to be an effective cure for stress and nerves.
Join me for Floral Friday Fotos by linking your flower photos below, and please leave a comment once you have done so! 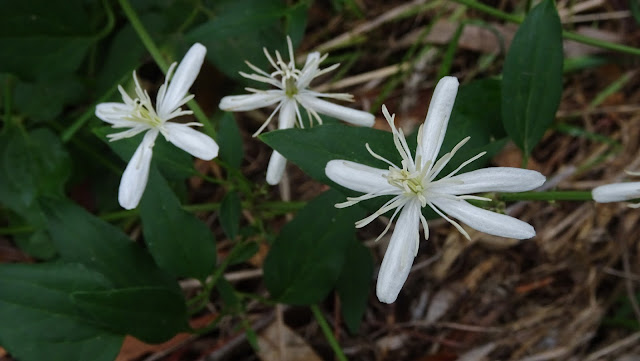 Click here to enter
Posted by Melbourne Australia Photos at 05:47