Flax (Linum usitatissimum), also known as common flax or linseed, is a member of the genus Linum in the family Linaceae. It is a food and fibre crop cultivated in cooler regions of the world. The textiles made from flax are known in the Western countries as linen, and traditionally used for bed sheets, underclothes, and table linen. The oil is known as linseed oil. In addition to referring to the plant itself, the word "flax" may refer to the unspun fibres of the flax plant.
Coriander (Coriandrum sativum), also known as cilantro or Chinese parsley, is an annual herb in the family Apiaceae. All parts of the plant are edible, but the fresh leaves and the dried seeds are the parts most traditionally used in cooking. Most people perceive the taste of coriander leaves as a tart, lemon/lime taste, but a smaller group, of about 4–14% of people tested, think the leaves taste like bath soap, this being linked to a gene which detects aldehyde chemicals also present in soap.
Join me for Floral Friday Fotos by linking your flower photos below, and please leave a comment once you have done so! 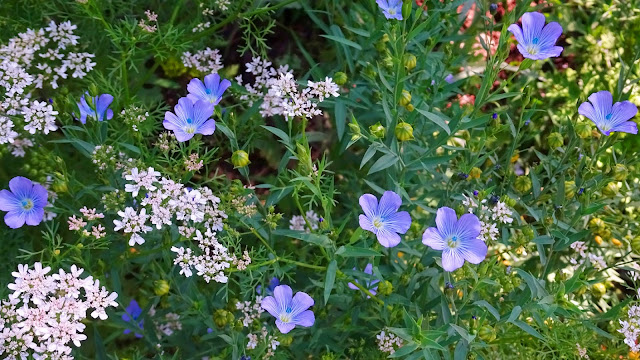 Click here to enter
Posted by Melbourne Australia Photos at 06:41