Doryanthes excelsa, known as Gymea Lily, is a flowering plant indigenous to the coastal areas of New South Wales near Sydney. The plant has sword-like leaves more than a metre long. It flowers in spring and summer, sending up a flower spike up to 6 m high, which at its apex bears a large cluster of bright red flowers, each 10 cm across. The name "Gymea Lily" is derived from a local Eora dialect. Doryanthes means spear-flower in Greek, and excelsa is Latin for exceptional. The Sydney suburbs of Gymea and Gymea Bay are named after the lily.

We are seeing more and more of these striking flowers being planted in Melbourne, and this specimen is growing in the City, near William St South, close to the North bank of the Yarra, just under the train overpass. 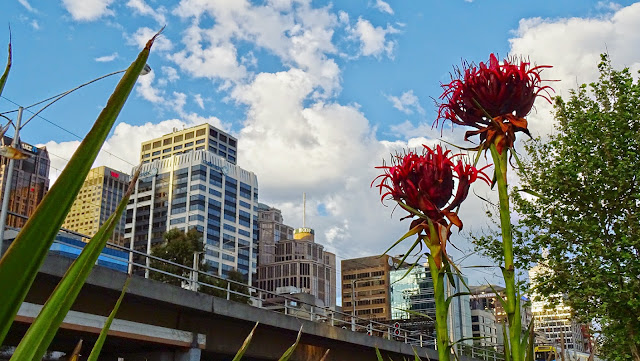 Click here to enter
Posted by Melbourne Australia Photos at 04:11