Rosa ‘Lorraine Lee’ was bred by a famous Australian Rose Breeder, Alister Clark in 1924. It is named after Lorraine Lee, who was born in Melbourne in 1890, and was a cousin of Jessie Clark, Alister’s niece. During World War I, Lorraine worked in the Women’s Land Army in England and the Ministry of Munitions, earning an MBE for her dedication. In 1920, on a visit to Australia, Alister showed her his unnamed rose seedlings and asked her to choose one. The rose she chose became Alister Clark’s most famous and popular rose ‘Lorraine Lee”.

The unique characteristic of this rose is its winter flowering. When nearly every other rose in the garden is asleep, Lorraine Lee is still flowering and will continue to do so until early spring when it should be pruned – it will recommence flowering early November. As a bush, Lorraine Lee can grow into a large 2m x 2m plant with dark glossy leaves. It is reasonably disease resistant. Watch out for its thorns. They are sharp, big and dangerous. Keep it well away from driveways and paths.

Its soft pink-apricot hybrid tea flowers begin as long, pointed elegant buds and open to a cupped bloom, with a superb strong fragrance. Regular removal of spent blooms will ensure this rose is almost constantly in flower. A climbing version of Lorraine Lee is also available, but it needs plenty of room as it is reasonably vigorous. Lorraine Lee is probably the most popular of all Australian bred roses and as a winter bloomer, deserves a place in all rose gardens and a perfect choice for the July ‘Rose of the Month’. 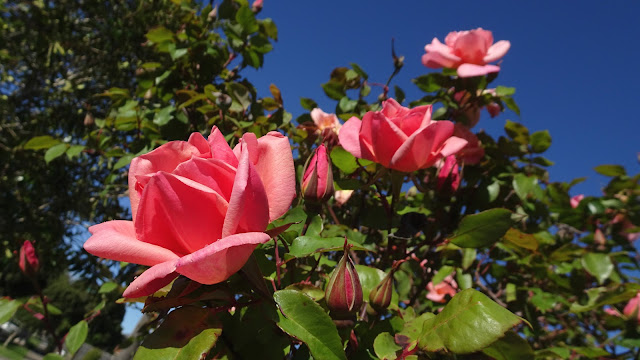 Click here to enter
Posted by Melbourne Australia Photos at 06:16