Dipodium roseum, commonly known as pink hyacinth orchid, in the family Orchidaceae is a leafless mycoheterotrophic orchid found in east and south-eastern Australia. The species was formally described in 1991. The type specimen was collected in Montrose in Victoria's Dandenong Ranges. The species was previously included in a wider circumscription of Dipodium punctatum.

For most of the year, plants are dormant and have no above-ground presence. Below the ground lie fleshy roots. Flower spikes ranging from 30 to 90 cm in height appear between December and April. These racemose inflorescences have 15 to 40 pink flowers with small darker spots. The sepals and petals are strongly recurved and the three-lobed labellum is pink with dark lines and a band of mauve hairs. A rare white-flowering form also exists.

Pollination of this species, as for all species in the genus, is by native bees and wasps. No leafless species of Dipodium has been sustained in cultivation due to the inability to replicate its association with mycorrhizal fungi in a horticultural context. I.e. it needs the wild underground fungi to nourish it as it has no leaves and cannot photosynthesise. 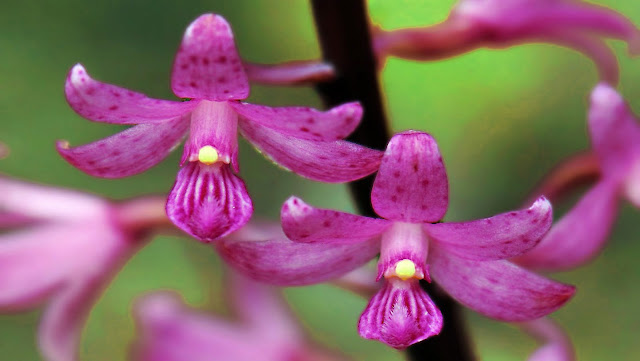 Click here to enter
Posted by Melbourne Australia Photos at 05:59