Wisteria (also spelled Wistaria or Wysteria) is a genus of flowering plants in the pea family, Fabaceae, that includes ten species of woody climbing bines native to the Eastern United States and to China, Korea, and Japan. Some species are popular ornamental plants, especially in China and Japan. The botanist Thomas Nuttall said he named the genus Wisteria in memory of Dr. Caspar Wistar (1761–1818). Questioned about the spelling later, Nuttall said it was for "euphony", but his biographer speculated that it may have something to do with Nuttall's friend Charles Jones Wister, Sr, of Grumblethorpe, the grandson of the merchant John Wister.

Wisteria sinensis, shown here flowers in the spring (just before or as the leaves open). Here is a Summer-flowering plant, which is in our neighbour's garden presently. Our squiffy weather may have something to do with the unseasonal blooming! The flowers of this species are fragrant, and the seeds are produced in pods similar to those of Laburnum, and, like the seeds of that genus, are poisonous. Wisteria is an extremely hardy plant that is considered an invasive species in many parts of the world. 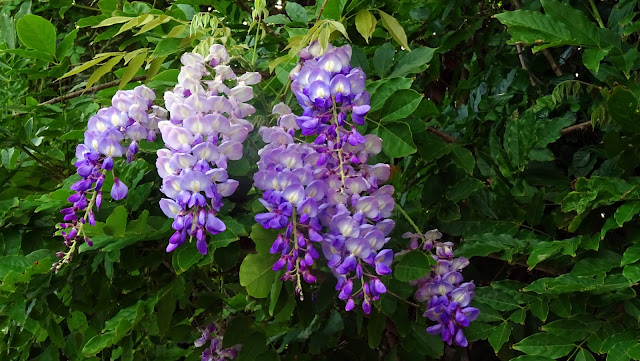 Click here to enter
Posted by Melbourne Australia Photos at 04:07