Isopogon formosus or Rose Cone Flower is a shrub in the Proteaceae family that is endemic to areas near Albany and Esperance in Western Australia. In occurs naturally in heathland and woodland areas. It has an erect or bushy form and is usually between 1.5 and 2 metres high.

The pink flowers appear from mid winter to early summer. Rounded "drumsticks" containing the seeds appear later, formed from the old flower parts. The plant's leaves are divided, narrow, terete and about 5 cm long. Isopogon formosus prefers full sun to partial shade in a well-drained sandy or gravelly soil. In the Australian National Botanic Gardens (ANBG) in Canberra they use a special mix of 2:1 sand and granite. It will tolerate light or moderate frosts but will not tolerate heavy frosts or extended periods of dryness. It can be propagated by either seed or cutting. The ANBG have had more success with cuttings than seed. When taking cuttings use older material, not that from the soft tips. A rooting hormone such as IBA should be used to promote root growth.

Isopogon formosus responds well to light pruning which improves the shape. Tip pruning from an early stage promotes lateral growth, however it must not be over-pruned. It does not suffer from any particular pest but is susceptible to the root rot fungus Phytophthora cinnamoni. You should also only use a slow release fertiliser or one that is suitable for Australian natives as this Isopogon is particularly sensitive to soluble phosphorus. It is difficult to cultivate this plant in the eastern states, as it will not tolerate humidity and is less hardy than some of the naturally occurring eastern species. A possible alternate way for it to be grown is to grow it in a pot as the particular conditions it requires can be satisfied readily and be more easily monitored. It is well worth attempting to grow, as it is a spectacular plant that can be used as a feature in the garden all year round. 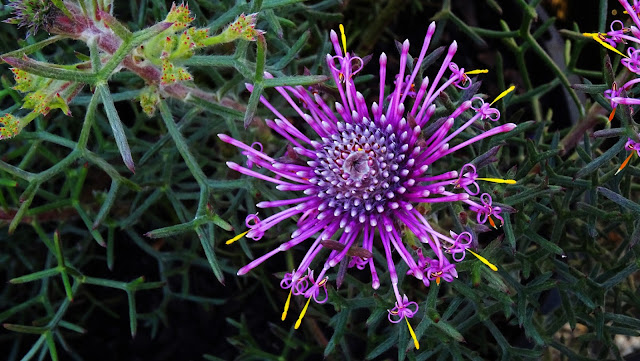 Add your own link to the Linky list below and say hello in a comment. Please visit other participants in the meme.
You are invited to the Inlinkz link party!
Click here to enter
Posted by Melbourne Australia Photos at 04:34