Echium candicans (syn. Echium fastuosum J.Jacq.), commonly known as pride of Madeira, is a species of flowering plant in the family Boraginaceae, native to the island of Madeira. It is a large herbaceous perennial subshrub, growing to 1.5–2.5 m. In the first year after germination the plant produces a broad rosette of leaves. In the second and subsequent years more or less woody flowering stalks are produced clothed in rough leaves.

The flower head is large and covered with white or blue flowers having red stamens. The Latin specific epithet candicans means “shining white”, referring to one colour form of this species. It is much visited by bees and butterflies for its nectar. Echium candicans is cultivated in the horticulture trade and widely available throughout the world as an ornamental plant for traditional and drought tolerant water conserving gardens. It is particularly suitable for coastal planting, and is a popular ornamental in coastal California.

With a minimum temperature requirement of 5–7 °C, in frost-prone areas it needs some winter protection. It has gained the Royal Horticultural Society's Award of Garden Merit. In California, it is also an invasive species. It is removed from native plant communities as part of habitat restoration efforts in coastal parks such as the Golden Gate National Recreation Area. In New Zealand it is a common garden escape onto road-side verges and shingle banks throughout the drier parts of the two principal islands. In the state of Victoria, Australia, it is considered to be a high weed risk and an alert has been posted by the Department of Primary Industries. 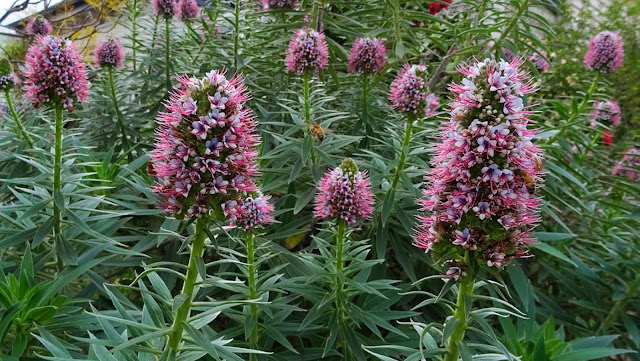 You are invited to the Inlinkz link party!
Click here to enter
Posted by Melbourne Australia Photos at 04:02