Cosmos sulphureus is also known as sulfur cosmos and yellow cosmos. It is native to Mexico, Central America, and northern South America, and naturalised in other parts of North and South America as well as in Europe, Asia, and Australia. It is within the Asteraceae family. This species of Cosmos is considered a half-hardy annual, although plants may re-appear via self-sowing for several years.

Its foliage is opposite and pinnately divided. The plant height varies from 30–210 cm. The original and its cultivars appear in shades of yellow, orange, and red. It is especially popular in Korea and Japan, where it is often seen in mass plantings along roadsides, following an initiative pursued by the Korean-Japanese botanist Woo Jang-choon. This plant was declared invasive by the United States Southeast Exotic Pest Plant Council in 1996.

Growth characteristics of this plant include: Germination takes between 7 and 21 days at the optimal temperature of 24˚C; flowering begins between 50 and 60 days after germination. It prefers a soil pH between 6.0 and 8.5, reflecting its native habitat in the alkaline regions of Central America Flowering is best in full sun, although partial shade is tolerated The plant is tolerant to drought after germination, and is seldom subject to insect or disease damage; this vigour is attested by its status as a pest in some areas of the United States. The flowers of all Cosmos attract birds and butterflies, including the monarch butterfly.

Join me for Floral Friday Fotos by linking your flower photos below, and please leave a comment once you have done so! If you link your post here, please show a link back to this site on your blog post... 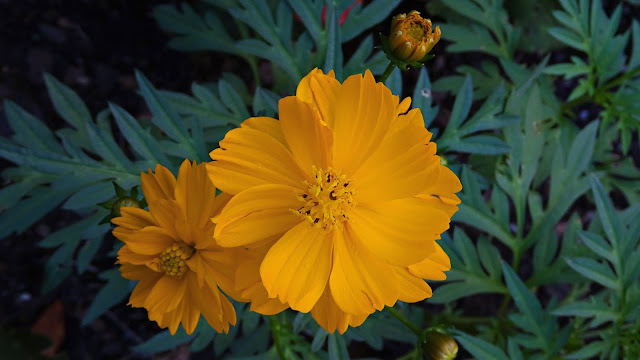 Add your own link to the Linky list below and say hello in a comment. Please visit other participants in the meme. Thank you for your loyalty and perseverance in linking up, it is appreciated!
You are invited to the Inlinkz link party!
Click here to enter
Posted by Melbourne Australia Photos at 04:56