The pea is most commonly the small spherical seed or the seed-pod of the pod fruit Pisum sativum. Each pod contains several peas, which can be green or yellow. Pea pods are botanically fruit, since they contain seeds and develop from the ovary of a (pea) flower. The name is also used to describe other edible seeds from the Fabaceae such as the pigeon pea (Cajanus cajan), the cowpea (Vigna unguiculata), and the seeds from several species of Lathyrus.

P. sativum is an annual plant, with a life cycle of one year. It is a cool-season crop grown in many parts of the world; planting can take place from winter to early summer depending on location. The average pea weighs between 0.1 and 0.36 gram. The immature peas (and in snow peas the tender pod as well) are used as a vegetable, fresh, frozen or canned; varieties of the species typically called field peas are grown to produce dry peas like the split pea shelled from the matured pod. These are the basis of pease porridge and pea soup, staples of medieval cuisine; in Europe, consuming fresh immature green peas was an innovation of Early Modern cuisine.

The wild pea is restricted to the Mediterranean basin and the Near East. The earliest archaeological finds of peas date from the late neolithic era of current Greece, Syria, Turkey and Jordan. In Egypt, early finds date from c. 4800–4400 BC in the Nile delta area, and from c. 3800–3600 BC in Upper Egypt. The pea was also present in Georgia in the 5th millennium BC. Farther east, the finds are younger. Peas were present in Afghanistan c. 2000 BC; in Harappan civilization around modern-day Pakistan and western- and northwestern India in 2250–1750 BC. In the second half of the 2nd millennium BC, this legume crop appears in the Ganges Basin and southern India. 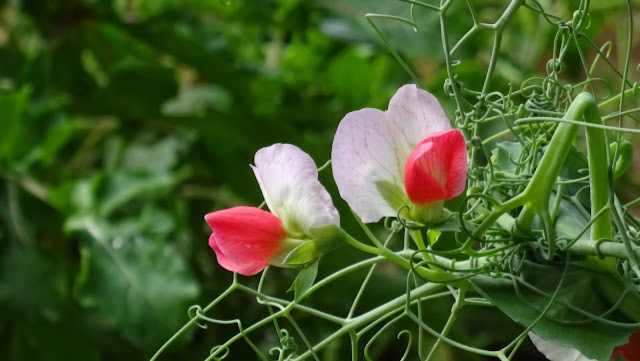 Click here to enter
Posted by Melbourne Australia Photos at 05:58