Alstroemeria, commonly called the Peruvian lily or lily of the Incas, is a genus of flowering plants in the family Alstroemeriaceae. They are all native to South America. Almost all of the species are restricted to one of two distinct centres of diversity, one in central Chile, the other in eastern Brazil. Species of Alstroemeria from Chile are winter-growing plants while those of Brazil are summer-growing. All are long-lived perennials except Alstroemeria graminea, a diminutive annual from the Atacama Desert of Chile.

The genus was named after the Swedish baron Clas Alströmer (1736 – 1794) by his close friend Carolus Linnaeus. Many hybrids and at least 190 cultivars have been developed, featuring many different markings and colours, including white, yellow, orange, apricot, pink, red, purple, and lavender. The most popular and showy hybrids commonly grown today result from crosses between species from Chile (winter-growing) with species from Brazil (summer-growing). This strategy has overcome the problem of seasonal dormancy and resulted in plants that are evergreen, or nearly so, and flower for most of the year. This breeding work derives mainly from trials that began in the United States in the 1980s. The flower, which resembles a miniature lily, is very popular for bouquets and flower arrangements in the commercial cut flower trade.

Shown here is the hybrid 'Indian Summer'. This variety has a strong upright habit and produces pale orange to yellow flowers set against unique bronze foliage. Height 70-100cm spread 30-70cm. Plant in part-shade, fertilise regularly and do not allow the soil to dry out. 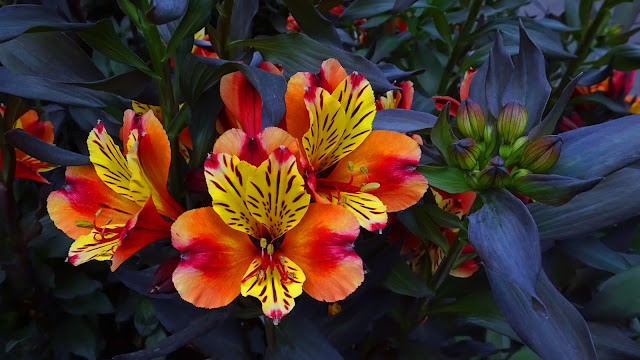 Add your own link to the Linky list below and say hello in a comment. Please visit other participants in the meme. Thank you for your loyalty and perseverance in linking up, it is appreciated!
Posted by Melbourne Australia Photos at 04:53