Casuarina is a genus of 17 tree species in the family Casuarinaceae, native to Australia, the Indian Subcontinent, southeast Asia, and islands of the western Pacific Ocean. It was once treated as the sole genus in the family, but has been split into three genera. They are evergreen shrubs and trees growing to 35 m tall. The foliage consists of slender, much-branched green to grey-green twigs bearing minute scale-leaves in whorls of 5–20. The apetalous flowers are produced in small catkin-like inflorescences.

Most species are dioecious, but a few are monoecious. The fruit is a woody, oval structure superficially resembling a conifer cone, made up of numerous carpels, each containing a single seed with a small wing. The generic name is derived from the Malay word for the cassowary, kasuari, alluding to the similarities between the bird's feathers and the plant's foliage, though the tree is called rhu in current standard Malay.

Casuarina species are a food source of the larvae of hepialid moths. Casuarina obesa (shown here), commonly known as Swamp She-oak or Swamp Oak, is a species of Casuarina that is closely related to C. glauca and C. cristata. The Noongar peoples know the plant as Goolee, Kweela, Kwerl and Quilinock. It is native to a broad area of south-western Australia, with a much more restricted occurrence in New South Wales and Victoria. It is a small dioecious (male and female flowers on separate trees) tree, growing to 1.5 to 10 metres in height and capable of flowering at any time of year. It has male and female flowers on separate plants, the female plants produce woody cones in an indehiscent state, with crops from two seasons sometimes present. It is found in sand or clay soils, often in brackish or saline environments, along rivers, creeks and salt lakes. It is widely planted for agroforestry, particularly in salt-affected areas, and as a street tree. 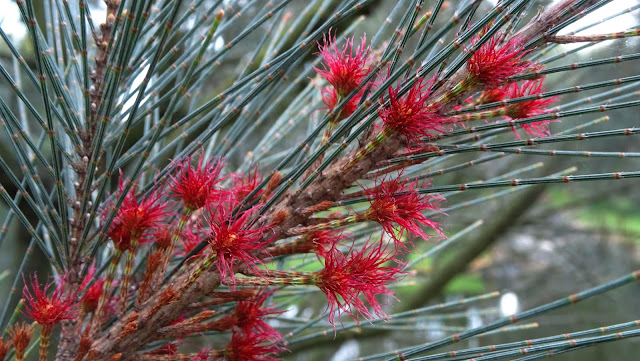 Add your own link to the Linky list below and say hello in a comment. Please visit other participants in the meme (I know I've been remiss in visiting all of your entries, however, I am currently very busy with work - I'll be back viewing all your entries as soon as I can!).

Posted by Melbourne Australia Photos at 06:14