Telopea is an eastern Australian genus of four species. Two are confined to New South Wales, one to Tasmania and one extends from eastern Victoria into New South Wales. Telopea belongs to the family, Proteaceae, which is predominantly Australian and southern African. The Waratah is a stout, erect shrub which may grow to 4 metres. The dark green leathery leaves, 13-25 cm in length, are arranged alternately and tend to be coarsely toothed. The flowers are grouped in rounded heads 7 to 10 cm in diameter surrounded by crimson bracts, about 5 to 7 cm long. It flowers from September to November and nectar-seeking birds act as pollinators. Large winged seeds are released when the brown leathery pods split along one side. 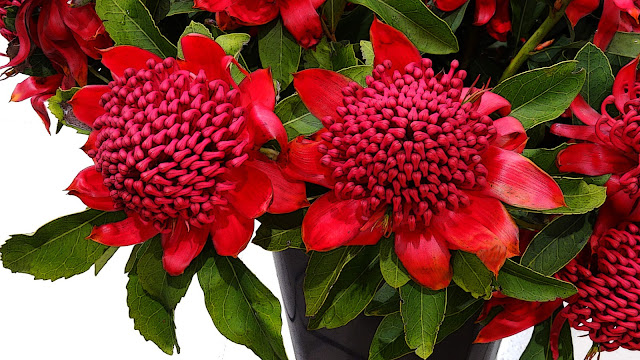 Posted by Melbourne Australia Photos at 07:04