Buddleja commonly known as the butterfly bush is a genus comprising over 100 species of flowering plants endemic to Asia, Africa, and the Americas, within the Buddlejaceae family. The generic name bestowed by Linnaeus posthumously honoured the Reverend Adam Buddle (1662–1715), a botanist and rector in Essex, England, at the suggestion of Dr. William Houstoun. Houstoun sent the first plants to become known to science as buddleja (B. americana) to England from the Caribbean about 15 years after Buddle's death.

As garden shrubs Buddlejas are essentially 20th-century plants, with the exception of B. globosa which was introduced to Britain from southern Chile in 1774 and disseminated from the nursery of Lee and Kennedy, Hammersmith. Several species are popular garden plants, the species are commonly known as 'butterfly bushes' owing to their attractiveness to butterflies, and have become staples of the modern butterfly garden; they are also attractive to bees and moths.

The most popular cultivated species is Buddleja davidii from central China, named for the French Basque missionary and naturalist Père Armand David. Other common garden species include the aforementioned B. globosa, grown for its strongly honey-scented orange globular inflorescences, and the weeping Buddleja alternifolia. Several interspecific hybrids have been made. Some species commonly escape from the garden. B. davidii in particular is a great coloniser of dry open ground; in urban areas in the United Kingdom, it often self-sows on waste ground or old masonry, where it grows into a dense thicket, and is listed as an invasive species in many areas.

Popular garden cultivars include 'Royal Red' (reddish-purple flowers), 'Black Knight' (very dark purple), 'Sungold' (golden yellow), and 'Pink Delight' (pure pink). In recent years, much breeding work has been undertaken to create small, more compact buddlejas, such as 'Blue Chip' which reach no more than 0.6–0.9 m tall, and which are also seed sterile, an important consideration in the USA where B. davidii and its cultivars are banned from many states owing to their invasiveness. 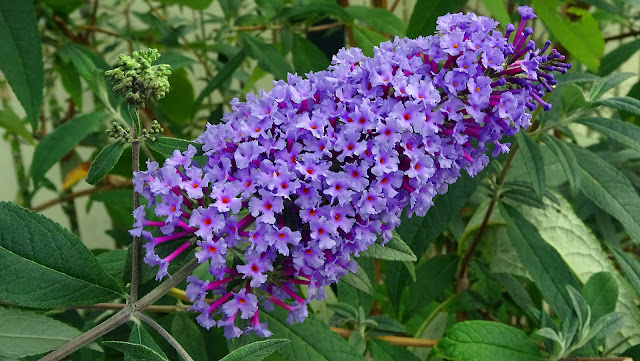 Posted by Melbourne Australia Photos at 08:55