Cyclamen persicum, the Persian cyclamen, in the family Primulaceae, is a species of flowering herbaceous perennial plant growing from a tuber, native to rocky hillsides, shrubland, and woodland up to 1,200 m above sea level, from south-central Turkey to Israel and Jordan. It also grows in Algeria and Tunisia and on the Greek islands of Rhodes, Karpathos, and Crete, where it may have been introduced by monks. Cultivars of this species are the commonly seen florist's cyclamen.

Wild plants have heart-shaped leaves, up to 14 cm usually green with lighter marbling on the upper surface. Flowers bloom from winter to spring (var. persicum) or in autumn (var. autumnale) and have 5 small sepals and 5 upswept petals, usually white to pale pink with a band of deep pink to magenta at the base. After pollination, the flower stem curls downwards slightly as the pod develops, but does not coil as in other cyclamens. Plants go dormant in summer.

Cyclamen persicum has a dark-brown tuberous root which is semi-poisonous. In some cultures, the tubers were used in making soap, as they generate a lather when mixed with water. The Bedouins of Mandate Palestine used to collect the root, and after grating it, would mix it with lime and sprinkle it over the surface of lakes or other large bodies of water known to contain fish. These poisonous mixtures would stun fish, which would then come to the surface and be collected by the fishermen. Such methods, as well as fishing with explosives, which came into use in the early 20th century, were banned by the British Mandate authorities. 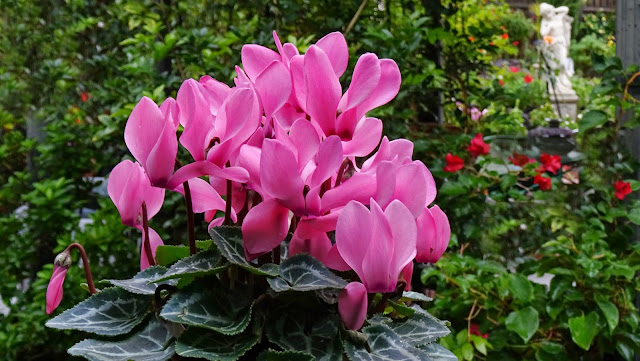 Posted by Melbourne Australia Photos at 08:21