Spartium junceum, commonly known as Spanish broom or weaver's broom, is a species of flowering plant in the family Fabaceae. It is the sole species in the genus Spartium, but is closely related to the other brooms in the genera Cytisus and Genista. There are many binomials in Spartium that are of dubious validity. The Latin specific epithet junceum means "rush-like", referring to the shoots, which show a passing resemblance to those of the rush genus Juncus.

This species is native to the Mediterranean in southern Europe, southwest Asia and northwest Africa, where it is found in sunny sites, usually on dry, sandy soils. S. junceum is a vigorous, deciduous shrub growing to 2–4 m tall, rarely 5 m, with main stems up to 5 cm thick, rarely 10 cm. It has thick, somewhat succulent grey-green rush-like shoots with very sparse small deciduous leaves 1 to 3 cm long and up to 4 mm broad. The leaves are of little importance to the plant, with much of the photosynthesis occurring in the green shoots (a water-conserving strategy in its dry climate).

The leaves fall away early. In late spring and summer shoots are covered in profuse fragrant yellow pea-like flowers 1 to 2 cm across. In late summer, the legumes (seed pods) mature black and reach 8–10 cm long. They burst open, often with an audible crack, spreading seed from the parent plant. Spartium junceum has been widely introduced into other areas as an ornamental plant, and is regarded as a noxious invasive species in places with a Mediterranean climate such as California and Oregon, Hawaii, central Chile, southeastern Australia, the Western Cape in South Africa and the Canary Islands and Azores.

The plant is used as an ornamental plant in gardens and in landscape plantings. It has gained the Royal Horticultural Society's Award of Garden Merit. In Bolivia and Peru, the plant is known as retama (not to be confused with the genus Retama) and has become very well established in some areas. It is one of the most common ornamental plants, often seen growing along sidewalks in La Paz. Retama has made its way into the ethnobotany of the indigenous Aymara and Quechua cultures. The plant is also used as a flavouring, and for its essential oil, known as genet absolute. Its fibres have been used for making cloth and it produces a yellow dye. 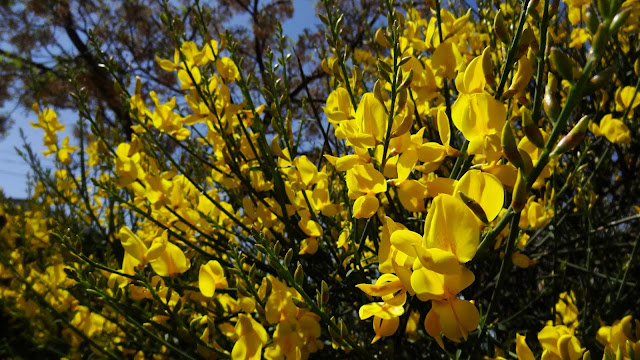 Click here to enter
Posted by Melbourne Australia Photos at 04:59